At a small weeknight service at my church a few years ago, I accidentally revealed that there was no Santa Claus. Well, most people already knew. But there was one young man, my acolyte, who didn’t. He was the only person under the age of 30 in the room, and it didn’t occur to me to think about whether he (still) believed in Santa Claus or not. I was talking very innocently about Nicholas of Myra, the 4th century bishop whose legendary generosity gave rise to jolly old St. Nick centuries later. The following Sunday my acolyte’s mother took me aside: “Thanks a lot, Father!”

My first impulse was to be defensive. Why should this kid believe in Santa anyway? Christmas is about Jesus! But then I backed up and thought about my own childhood. I don’t remember a moment when I went from believing in Santa to not believing. I don’t think I ever really did believe with any fervor; but the legend was valuable in creating in me and my sisters an imagination that was big enough for the truth of God in Jesus. Santa was a net positive. He was one piece in a puzzle of big imagination designed to accommodate big truth.

I have come to see that keeping various folk legends, along with exposure to fantastic literature and films, serve as something like the balloons or spacers that surgeons use on their patients before certain procedures. These devices prepare the body to receive what it will be given. There’s no room for something of real benefit without them. They are useful and necessary for a greater good. At some point they are swapped out for the real thing, but all in good time.

The Narnia and Lord of the Rings stories, Arthurian legends, Edith Hamilton’s Mythology, A Wrinkle in Time, The Wind in the Willows, and so many other things serve to make a big space for a big God in a little head and heart. As a father with my own children now, I see the positive effect of imaginative fiction in my own kids’ faith. Even Santa Claus has his place.

If you have ever seen the Christmas classic Miracle on 34th Street, you see how pitiful a little soul is that is raised without imagination. Little Susan resolutely does not believe in Santa Claus; and she doesn’t believe in anything else either. She is a skeptic almost from birth, with no room for God, no friends, and no fun. But something bigger than the self-contained world of her New York apartment and her hyper-rational mother breaks through. She is blown away by a jolly man with a white beard speaking Dutch to an orphan. Susan’s mother reacts without any awe or wonder: “Susan, I speak French but that doesn’t make me Joan of Arc.” But Susan isn’t buying her mom’s analysis. The world is far more mysterious and wonderful. Her imagination begins to expand. In time, her mother’s does too.

More recently in our culture, we may give thanks for the Harry Potter books. Are they Christian? No. But children and adults alike may be equipped by them to believe truly and deeply in what Christians profess in the Nicene Creed: We believe in “all things visible and invisible.” What are those invisible things? Tell me about magic that I can pin my hopes on! A world that is given ways to grow in imagination will naturally ask such questions and make such demands. And the Church has answers in our sacred stories, which are full of imaginative detail and also happen to be true. God made us, died for us, rose again for us, speaks to us, empowers us, and promises to come again.

J.R.R. Tolkien writes in his essay “On Fairy-stories,”

The consolation of fairy-stories, the joy of the happy ending; or more correctly of the good catastrophe, the sudden joyous “turn” (for there is no true end to any fairy-tale): this joy, which is one of the things which fairy-stories can produce supremely well, is not essentially “escapist,” nor “fugitive.” In its fairy-tale – or otherworld – setting, it is a sudden and miraculous grace: never to be counted on to recur. It does not deny the existence of dyscatastrophe, of sorrow and failure: the possibility of these is necessary to the joy of deliverance; it denies (in the face of much evidence, if you will) universal final defeat and in so far is evangelium, giving a fleeting glimpse of Joy, Joy beyond the walls of the world, poignant as grief.

Grace, good news, joy. The victory of God. This is the stuff of great stories. And this is the stuff of our faith. This is big truth prepared for by big imagination. My young acolyte knows this truth well. He has been equipped with delight in the mysteries of God’s will, where we find our place in the greatest story ever told. That story begins at Genesis 1:1 and carries right on through Revelation 22. Share it with others. Use the Tooth Fairy if you have to.

Andrew Petiprin’s new Key Life book, Truth Matters, comes out September 3rd, but you can pre-order and get a great deal now. 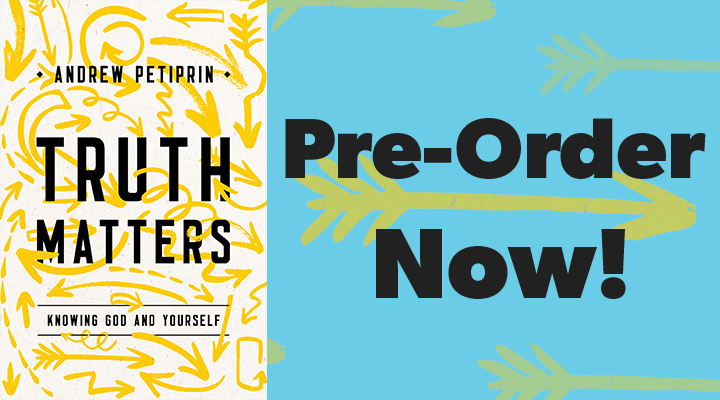