One of the most remarkable verses in all Scripture is Ephesians 3:10, where Paul says that the “manifold” or “multifaceted” wisdom of God is now being put on display to the powers and principalities in the heavenly places through the church.

Steve Brown tells the story of the preacher who’s about to die and who is asked: “What are you most looking forward to in heaven?” His answer: “I’m looking forward to seeing God hold up the church in the Devil’s face and say, ‘She’s not much, but she’s all I needed to kick your tail!’” (I’m not certain that the translation is precise.)

What? Really? Are you kidding me?

The church is how God is kicking Satan’s tail? Riddled with heresy and goofiness? Plagued with false teaching at worst, shallow teaching at best? Riven by dissension over the smallest of issues: from the color of the carpet to whether it’s OK for children to draw pictures of Jesus in Sunday School?

Really? That church? Yes, that church.

Paul says we see dimly. Maybe what he means is that we only have a limited perspective. I think we have to think of the church as a cross-stitch. 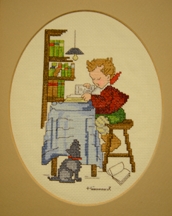 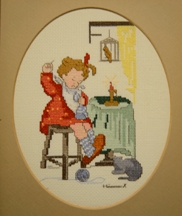 In fact, my wife Shari and I have enjoyed cross-stitching together since the early years of our marriage. As with many things we do together, however, we have wildly different approaches. I like the back of my cross-stitch pieces to look as good as the front — you never know if 10,000 years from now, your handiwork will show up in an archaeologist’s bucket and be used to form opinions about life when you were alive! So I lay strands side-by-side as neatly on the back as on the front; I tuck ends. Shari cares only about what the front looks like. The back of her cross-stitches are a mess: twisted strands, loose ends, chaotic starting and stopping points. But her fronts look as good as mine — and that’s all she cares about.

Jesus seems to be cross-stitching his church Shari’s way, not mine. 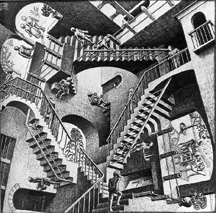 It’s as though Jesus were on the front side of the cross-stitch fabric and we’re on the back side. He pushes the threaded needle through one hole and our job is to push it back through an adjacent hole so he can make the X on the front side. We can’t see the front, but we do have a sense of what is taking shape on his side:

It’s a picture that would make the impossible constructions of Dutch graphic artist M. C. Escher look tame. Christ’s cross-stitch incorporates a House that God is filling, made up of living stones (Eph 2:11-21 & 1Pet 2:4-10).

One perspective to another

From one perspective the house looks like the Jerusalem temple, newly founded with Christ as cornerstone and the prophets and apostles as foundation, and with “the dividing wall of hostility” between Jew & Gentile (along with all other hostilities) broken down.

From another perspective the house looks like a replacement of the pagan temple to
Artemis, one of the “Seven Wonders of the World,” standing just outside the city limits of Ephesus. That building consisted of pillars holding up a roof that had a hole in it under which the rock goddess Artemis (purportedly having fallen from the sky) stood — she was pagan Ephesus’s “greatness.” This is the building Paul has in mind when he writes that “the church of the Living (i.e., “Not Dead”) God” is “pillar and foundation of the truth,” with the centerpiece (“the mystery of godliness”) being the Song of Jesus (“manifest in the flesh, vindicated in the Spirit…”), displacing the dumb rock that Artemis had been (see 1Tim 3:14-16).

One day we’ll also see that Jesus’s cross-stitch incorporates a most masculine figure, with Christ’s own face at the head and with us filling out his body, as though (I say this carefully) we were the extension of the incarnation itself: “joined and knit together by every joint with which it is supplied, when each part is working properly, making bodily growth and building itself up in love” (Eph 4:15-16).

In complementary fashion, Jesus’s cross-stitch incorporates a portrait of the most beautiful of ladies, for it includes us as Christ’s bride, she whom he is working to present to himself “spotless, holy, without blemish, radiant in glory” (Eph 5:25-28).

Observation Number One: for now, even if we could see the other side, we’d probably say, “Huh? I don’t get it.” (Maybe one of the reasons that in God’s common grace, modern and postmodern art have come along is to build into us some slight capacity for “getting” the wildness of his art!)

Observation Number Two: from our side, it’s even more a mess. Jesus does not seem to have assured that we will be especially “neat” on our side. If your experience of the church is anything like mine, it’s pretty chaotic. And yet, for all our messiness, folly, mixed motives, and discouragement, we’ll find that if we just keep pushing the needle back through, something beyond beautiful is in process: “… that through the church the manifold wisdom of God might now be made known to the principalities and powers in the heavenly places” (Eph 3:10, RSV).

history of grace the Gospel What about love?