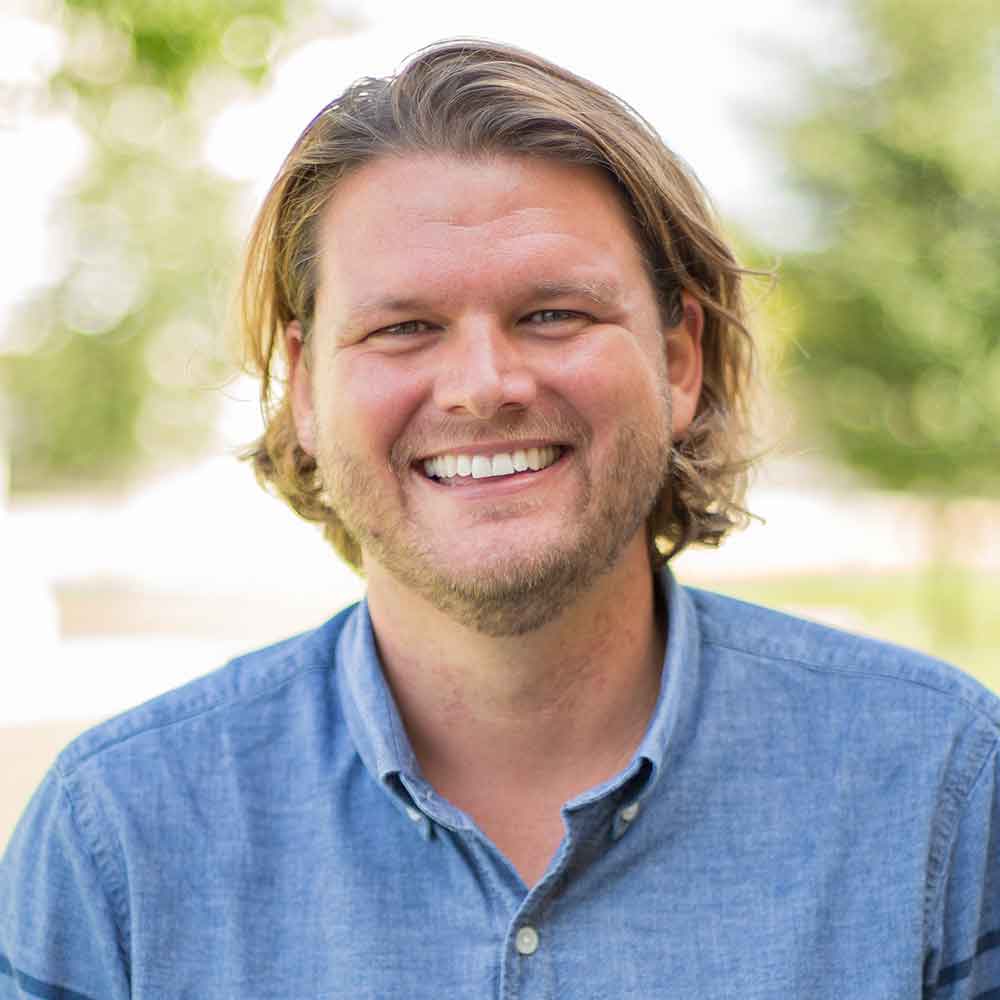 Maybe you’ve heard that Christianity is about being good and presenting your goodness to God so that he will bless you.

If you want to know what Christianity and Jesus are all about, look at his family. It’s messy. It’s broken. It’s real.

On the way to the manger, it’s a truly unlikely story involving a very unlikely woman or rather girl, the last listed in Matthew’s genealogy of Jesus…His birth mother, Mary.

Mary was a young teenage girl in that awkward stage between childhood and adulthood. She was poor. She was a seemingly insignificant peasant living in a small country town, called Nazareth. Far from the center of power. Mary was a nobody in a nothing town in the middle of nowhere.

And yet nobody is a nobody to God.

Mary would become the mother of the Savior of the world and as my favorite preacher, Charles Spurgeon, calls her, “The First Christian.”

I was really intrigued by that thought. Mary, the first Christian. What does that mean? And does it mean anything for us? I started thinking about Mary’s response to the angel Gabriel in Luke 1:26-38 and what it means to become a Christian.

Being a Christian is simply being a person who believes in Jesus and says, like Mary, “I am the Lord’s servant. May your word to me be fulfilled.”

How does this begin? An angel comes to Mary and says, “Greetings, you who are highly favored! The Lord is with you.”

Right from the beginning we see grace. The word the angel used for “favor” comes from the Greek word for “grace.” Mary was an object of grace…of an amazing grace. The angel essentially says to her, “O Mary, you are blessed. You have a gracious God. No woman that has ever lived on earth has been shown such grace from God.”

Mary thinks it through.

And how does Mary respond? It is so real. The Scripture tells us she “was greatly troubled at his words and wondered what kind of greeting this might be.”

In the Greek, the word “wondered” means literally to logic through something, to rationally think, to analyze. Mary is doing what you and I would be doing if an angel appeared to us. She is asking herself, “Is this real?”

God had been silent for 400 years. He hadn’t spoken to his people through a prophet or angel or a vision since Malachi. This appearing would have been as shocking to Mary as it would be to us. So she had to think it through.

Maybe that’s where you are. And that’s a good thing. You’re thinking about its claims.

Christianity is more than thinking…but not less.

If the claims of Christianity trouble you, make you wonder, and cause you to think…that’s a good thing. Logic through it. That is an important step in becoming a Christian.

And then Mary asks, “How will this be since I am a virgin?” Makes sense, right?

To question is one of the bravest things we can do.

Now there is a way to ask a question that ends the conversation. It’s the cynical and cowardly way, the dismissive way…“How can this be?”

But it is brave to ask a question that exposes our doubts.

Mary was thinking through all she was hearing and it sounded crazy. But instead of remaining silent, she chooses to bring her doubts and questions out in the open.

Growing up in the church, I always assumed that doubts and questions were only for atheists…people who wanted to disprove God. And because of that, I missed out on relationship. A lot of my early adulthood was spent being tortured by doubts that I couldn’t take anywhere. If I had just looked at the mother of Jesus, I would have seen that I could have brought them to Him. And that my doubts, when brought to God, don’t move me away from Him, but towards Him.

When Mary brings her doubts and questions to God, the answer she receives is this: “For no word from God will ever fail” (Luke 1:37, NIV).

Think about that for a second. We’ve got God’s Word with us all the time.

When I feel like my sin is too great to be forgiven, especially when I’ve tried time and time again to stop, but I keep failing. “I, I am he who blots out your transgressions for my own sake, and I will remember your sin no more” (Isaiah 43:15). For no word from God will ever fail.

When you’ve been running away from God, feel beaten and broken by choices, and you’re certain God is punishing you. “Come, let us return to the Lord; for he has torn us, that he may heal us; he has struck us down, and he will bind us up” (Hosea 6:1). For no word from God will ever fail.

When life is just hard, everything seems to go wrong, and it doesn’t look like it will ever get better. “For everything, there is a season, and a time for every matter under heaven” (Ecclesiastes 3:1). For no word from God will ever fail.

When we find ourselves exhausted, especially from trying to please God…simply worn out from working so hard to be acceptable to Him. “Come to me, all who labor and are heavy laden, and I will give you rest. Take my yoke upon you and learn from me for I am gentle and lowly in heart, and you will find rest for your souls. For my yoke is easy and my burden is light” (Matthew 11:28-30). For no word from God will ever fail.

When you feel like the only one. “For we do not have a high priest who is unable to sympathize with our weaknesses, but one who in every respect has been tempted as we are, yet without sin” (Hebrews 4:15). For no word from God will ever fail.

And when the pain is so great. “He will swallow up death forever; and the Lord God will wipe away every tear from every face; he will remove the shame of his people from all the earth” (Isaiah 25:8). For no word from God will ever fail.

Mary is in relationship.

Becoming a Christian is also being in relationship.

The angel in responding to Mary’s question, not only says, “no word from God will ever fail,” but also that her cousin is pregnant in her old age. Do you see what the angel is doing here? He’s advising, or prompting, Mary to go see Elizabeth to process what she has just heard.

Part of the process of becoming a Christian involves relationship. Almost nobody comes to God without it…without processing the claims of Christianity with someone who knows a little bit more, who’s been walking it for a while.

Mary surrenders: “I am the Lord’s servant. May your word to me be fulfilled.”

Mary becomes a Christian by saying “yes” to God.

Mary was saying “yes” to a pregnancy and all the pain that goes with that…but she also had to be willing to give up almost everything she knew and loved.

In fact, in John 9:29 the Pharisees would do just that: “We don’t even know where this man comes from.” He was Jesus of Nazareth. They knew his hometown. They were making a disparaging comment about his father.

On top of all that, this teenage girl had to be willing to give up her life, literally. She knew some would ask for her death as payment for the sin of adultery.

That was just what she could imagine. She couldn’t have imagined all the other hardships, the journey to Bethlehem on a donkey while 9 months pregnant and the exile in Egypt to escape the hatred of King Herod.

And then all that came when Jesus began his ministry. There was so much controversy surrounding Jesus that at one point Mary tries to convince Jesus to leave the ministry altogether. I would imagine that it became pretty apparent to Mary early on that Jesus was on a collision course with death.

When she said “yes,” Mary could never have imagined the pain of enduring her son’s arrest, trial and crucifixion.

Mary was surrendering everything.

It’s this last step in becoming a Christian where most people bail.

And that’s what it means to be blessed. Elizabeth says to Mary, “Blessed is she who has believed that the Lord would fulfill his promises to her!”

When the Lord blesses you, when he makes his face to shine upon you and when He brings light into the dark and lonely places in our lives…He’s restoring us. He’s making us fully human. To be blessed is to recover what God had in mind when He thought you up.

All of our struggle and pain are the result of us forgetting who we truly are. It’s the result of believing the lie of the serpent which says that we are forgotten by God, that God is withholding from us, that God is keeping us from being all that we could be.

To be blessed means to be alive. John 10:10 says, “The thief came to steal and destroy but I came that they may have life and life fully.”

But we don’t believe that. We believe the lie instead.

How did God crush the lie? He became vulnerable.

He became vulnerable to us.

We don’t surrender everything to God because we think He’ll take away things that we love and need, and make us happy. We see him as an “Almighty killjoy.”

So what does He do? Does He say, “How dare you think of me that way? Who do you think you are? If I tell you not to do something, don’t do it. Live right!”

No. God becomes a baby.

“And you shall call his name Jesus, because He will save His people from their sins” (Matthew 1:21).

For no word from God will ever fail.