It's easy to put forward exactly what we want others to see. When we don't feel safe, when we feel as if we must meet an unspoken expectation or rise to someone else's idea of us, it's even easier to drop our authenticity and just communicate with calculated precision only the areas we are willing to uncover.

I lived there for nearly 40 years, moving in and out of varied circles, showing the contented mother, the educated thinker, the organized administrator. When it was good, it was very, very good, and when it was bad it was, well, terrible. I was angry, simmering with exhaustion and frustration under all that beautiful glossy exterior.

Worse, there was no restoration. It was a three-part-cycle: 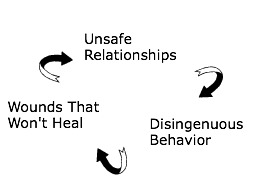 By remaining in a community where it was only safe to reveal the best parts, where when weaknesses were exposed, judgment was pronounced instead of mercy and grace, I learned how to report only the best parts or what was working well, and so the redemption so badly needed in so many areas of my life was stunted or altogether absent.

When we escaped from the environment that had us so bound up in our good works, we landed in a place where truth and freedom and authenticity were not only encouraged, they brought a response of grace and kindness and understanding. “Jesus is our only hope”, and “The gospel tells us we are already accepted” were words of life over our shiny but very, very crusty exteriors. The fake stuff began to fall off, the truth began to come out, the restoration began to happen.

Suddenly, I could reveal the cracks and broken places and I was met with Jesus, not condemnation or a list of things to DO to patch up the fissures with some sort of Holy spackling. Don’t kid yourself; only Jesus repairs the damage. Only Jesus fills in the empty places. And it’s already finished, on your behalf. 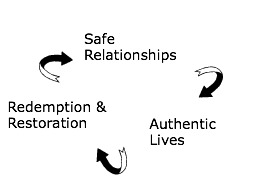