/ Articles / What is Grace?

Truth matters to me because I love God. I have tried and failed to get away from him. I have tried to avoid God and reject God, but I cannot escape his love.

Sometimes we just want to be left alone, especially when we’re sad or ashamed of ourselves. The truth can scare us. When we’ve done something we shouldn’t have done or feel things that seem too complicated to explain to anyone, many of us hide. Adam and Eve did just this after they disobeyed God in the garden of Eden. But God wouldn’t leave them alone. And he won’t leave us alone either.

John Newton (1725-1807), the writer of the famous hymn, “Amazing Grace,” discovered one day that he couldn’t hide his life from God. He was a young sailor and slave trader who realized one day that his life was headed away from the kingdom of God. He declared, “I once was lost but now am found.” In modern parlance, he knew that there is no such thing as “personal space” or “alone time” when it comes to how we relate to the Creator of the universe and the sustainer of all life. When we first realize that this is what God is like, it can make us feel–as it did with John Newton–like a wretch. But in a fully flourishing, orthodox Christian life, wretchedness has no hold on us for long. Our infinitely loving God moves in and takes control: “Twas grace that taught my heart to fear,” John Newton confesses, but immediately transitions to “and grace my fears relieved.”

But what is grace? Many Christians would agree with this definition from the catechism of the 1979 Book of Common Prayer: “Grace is God’s favor towards us, unearned and undeserved: by grace God forgives our sins, enlightens our minds, stirs our hearts, and strengthens our wills.” Put simply, Christians believe in a God who intervenes. The living God: Father, Son, and Holy Spirit is bound up in every aspect of creation and reveals himself in Holy Scripture, in sacraments, and in the natural world. There are religions and philosophies that shy away from such an immanent God, imagining instead a God who sets things in motion and steps away. But if we really take the Bible seriously and dig into it just about anywhere, we will find that the God of Israel, revealed to us in Jesus Christ, is active in history and active in our lives today. This gracious activity is certainly true in the lives of the saints, as we see above in John Newton’s life, and in so many others. There is simply nowhere that God is not doing things. There is no event in which he is not involved. Everything that happens in the world is the result of God’s activity, even when we do not or cannot perceive His presence. When sin and evil work against him, he establishes plans to bring blessing out of misery. God simply loves his creation too much to leave it alone, and this is the first principle of understanding God’s active, guaranteed grace. He loves the world and he loves you. He desires that you flourish for eternal life, and he has provided the means–literally everywhere–for this to happen.

Grace and truth are always intertwined. In fact, John tells us that when God became man in Jesus, revealing the full glory of the Father, he did so “full of grace and truth” (John 1:14). We see how this works in many different ways in the Old Testament, from God’s provision for Adam and Eve after their expulsion from Eden right up through Israel’s return from exile in Babylon and the rebuilding of their temple in Jerusalem (Genesis 3-4; Ezra 1-6). God delivers his people from bondage in Egypt, and rains food down upon them even in their disobedience. He gives them a Law to govern themselves in the midst of a broken world, and a rich land to call home (see Exodus and Numbers). At no point is God sitting a cold distance away. He is always teaching his people who he is and how he would have them live. Everything happens because it is his desire to express his transforming love to one people, Israel–and through them, to save the entire world (Genesis 12:2-3).

In Isaiah 55 we learn of God’s role in the agricultural cycle; and the prophet likens God’s active role in nature with the disseminating of his eternal Word. Isaiah does not say that seeds are planted and forgotten about, left to the cycles of a natural world detached from its source in God. Instead, the natural cycle is God’s doing, watering and bringing the snow. God is the one who both gives the “seed to the sower” and also “bread to the eater” (v. 10). From the beginning to the end, God is in control. For the farmer to fail to care for the seeds he has planted or for vandals to rip up what has been sown are both ways of working against God and his gracious will for a particular patch of earth. God has destined its fruitfulness and wills the accomplishment of his purpose. So it is with God’s saving grace, which we find in the distribution of his eternal Word–guaranteed to be found in Scripture and sacraments, but far more prevalent than we could ever imagine. Ultimately, God’s gracious Word is meant to get deep down inside each one of us and transform us from the inside out. The same Lord who set the stars in the heavens is the Lord whose Word is near you, “in your mouth and in your heart,” (Deuteronomy 30:14; Romans 10:8).

Taken from Andrew Petiprin’s new Key Life book, Truth Matters. It’s out and you can buy it now. 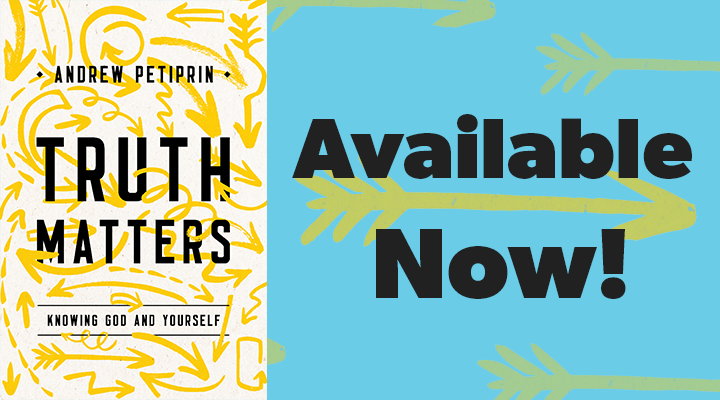