I was hoping for five minutes. Just five minutes alone in the shower. The thought of showering without interruptions, without cries for help or utter silence indicating something was amiss, was my most luxurious wish in those early years of mothering.

I’ve heard of toddlers staying in their rooms playing contently, safely staying out of harms way. These, however, were not my offspring. And from the sounds of it, most of you don’t have docile kids either. What do you expect? If you’re reading this blog you’re either starting a church, in another type of ministry or you’re related to me. Enough said. Others may live predictable lives, secure stable jobs, and procreate somewhat calm children. We don’t. It’s in our genes. If you need to answer the call of a child, please do so. But when you get a minute be sure to read the last paragraph.

My children were achieving high levels of unpredictability when we started our last church. And here’s my “Top 10” list for how they ensured I would never get time alone. 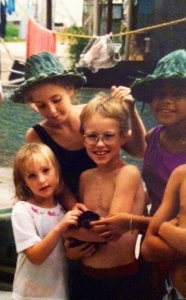 How does an 18-month-old open a can of paint?  Come on, kids, it’s time to ‘fess up.  She had to have had an accomplice.  I found her clothed in only a diaper, with a can of blue house paint and a paintbrush, having the time of her now-blue little life.

It started before he could talk. First it was gravity: testing falling objects. Fresh eggs were just the starting point. Soon it was every object he could pick up and drop, including the dog and his baby sister. Later he moved to experimenting only on himself and eventually graduated to jumping from airplanes. He wasn’t the only one, though.  His sister must have enjoyed his gravitational experiments, as she too became a jumper.  A neighbor saved the day by calling to inform me that our two-year old had removed the screen from the second story window and was posed to leap onto the concrete below.

Her thinking was as follows: “If I can go faster when roller skating or bike riding, then combining the two will double the speed.” The fact that our driveway was on a hill leading into busy street was not taken into consideration. Too late, she realized she couldn’t brake while wearing roller skates and riding a bike.

What is it about some kids putting everything into their mouths? I understand chewing on objects when teething, but drinking random substances? Tip learned from our local poison control center: If you are unsure how much a child has ingested of an empty perfume bottle, fill it back up with water and then measure the amount of liquid.

What started out as a small bonfire in the back yard quickly got out of control with the addition of gasoline. No, we were not home because our kids were no longer children.  Once again, a neighbor came to the rescue.

or in our case, Edwina. She loved the effect scissors had on everything, but especially on hair. Like most children, she started with her own hair, cutting a lovely swath from her forehead. Thankfully, she was the youngest or I imagine all the kids would have been given special haircuts. Next came the dolls. Then the animals. The cat got the worst end of the deal with the “spiked-to-a-touch-of-balding” style and a shampoo under the bathtub faucet. He was not cooperative, and was punished by being locked in the bathroom with the lights off.

I should have realized something was up when the youngest came in asking for a jar.  I assumed they were trying to catch beetles or butterflies—you know, something other people’s children would collect. Soon I heard the blocks being dumped from a large cloth bag and the back door slamming. Next thing I know they’ve talked a neighbor into catching a copperhead for them. What kind of an adult would catch a poisonous snake for young children and then give it to them?

3. The “Watch Me Upstage You” child

We didn’t have a nursery at church. That should explain everything, especially after the arrival of our third child. I’m not sure how it happened, but I heard people around me laughing and saw them pointing. And then I noticed our middle child up on stage peeking out from behind the speaker, making faces and pantomiming outrageous antics. I have repressed the rest of the memory, and have no idea how I got him off the stage.

For a special school event the children were told to wear “Sunday clothes.”  I was surprised when our first grader came downstairs the next morning in a jean skirt, flip flops, and a problematic top. Upon further questioning, I discovered she was trying to dress like the women she saw at our church where everyone was welcome, especially those with dubious reputations.

Uur son was two when he learned how to squeeze through the bars of our basement apartment windows. While this trick came in handy later when we needed him to squeeze back in and retrieve forgotten house keys, this was incredibly scary, to say nothing of humiliating. It was quite entertaining to my upstairs neighbor, however, who loved catching the little bugger and reporting all he did (which usually included defecating on the city sidewalks).

Of course I can tell these stories now with a sense of humor. However, when we’re in the difficult years of raising children and struggling with tasks of survival, it’s hard to stay focused on the bigger picture.

We have the chance to imprint these souls for eternity. Throughout scripture we encounter Christ figures—those whose lives are given for the many. Through one person, others are saved. Think Joseph, Jonah, or Esther. In giving our lives for the sake of these little ones, we too are Christ figures. In a significant way, we point to a savior who is the ultimate sacrifice for humankind.  Think about it. In giving birth, we lay down our lives and our bodies for another. In mothering we sacrifice our desires, our space, our time, and our sleep so they can have life.

Whether you’ve given literal birth or been life-givers in your work place and relationships, you know the sacrifice I’m referring to. Philippians 2:5-8 tells us the all-powerful one emptied himself and chose to take on weakness, to suffer on our behalf so we could have life. As we have the same mindset of Christ whether it’s with our children, our husbands or our churches, we too have the opportunity to be Christ-figures for them. My greatest privilege has been giving life to my children: Michaelanne, Corey, and Becca, and pointing them to the true giver of all life!

Phil 2: 5-8  In your relationships with one another, have the same mindset as Christ Jesus: Who, being in very nature God,  did not consider equality with God something to be used to his own advantage; rather, he made himself nothing  by taking the very nature of a servant, being made in human likeness. And being found in appearance as a man,  he humbled himself by becoming obedient to death—even death on a cross!

history of grace the Gospel talk the walk