Seeds from a Trinitarian Tin Cup

By his Spirit, this Triune God delights to invite us into the eternal joy of the Godhead, into Love himself. Grace is the door to the Trinity, and it’s always open. Single-person gods can’t offer that. They don’t make us their children. At best they make us their servants, but most of the time they make us their slaves.

There’s an old song that says, “You can’t roller skate in a buffalo herd.” That’s a fact proven by physics. There’s a formula and everything. The ability to achieve sufficient velocity via wheeled bipedal locomotion is inversely proportional to the number of cow patties within a limited amount of unobstructed surface area. Don’t even try it. It’s a mess.

I’d give the same advice to most people who want to illustrate the Trinity. There are too many land mines and you’re bound to get stuck in a thick pile of heresy. (Check out this video and you’ll see what I mean.) But I just happen to have 22 earned credit hours toward a Master of Arts in Theological Studies degree, so I figured I was up to the task. You can see how that turned out in my book coming out in a couple weeks, The Seed: A True Myth. I now realize just how insane I was to strap on my skates and take off into the herd.

What was I thinking? I probably wasn’t thinking enough, but the love of the Trinity compelled me. I’m not talking primarily about my love for the Trinity, rather the love within the Trinity. It’s a love that has always existed between God the Father and God the Son in the shared delight of God the Spirit. It’s a love that has graciously overflowed to me, filled me, and invited me into a divine life that has always existed and will never end.

Man, I have quickly moved from a field covered with cow pies onto holy ground, and there is no way to adequately unpack what I wrote in the paragraph above within the space of a blog post.

So, let’s do this… I’m going to share a few seeds I got from Dr. Michael Reeves in his immensely readable, profound, and even funny little book, Delighting in the Trinity. It’s like an unassuming tin cup that’s filled with seeds from God’s garden. Then, after you plant all the seeds, you go back to the tin cup and find that it’s overflowing with a fountain of life with which to water them. The book is that magical. And you’ll be surprised by the fruit that ends up hanging on the plants that grow from the seeds.

Dr. Reeves wrote this in the introduction to Delighting in the Trinity:

“‘God is love’: those three words could hardly be more bouncy. They seem lively, lovely and as warming as a crackling fire. But ‘God is a Trinity’? No, hardly the same effect: that sounds cold and stodgy … Yes, the Trinity can be presented as a fusty and irrelevant dogma, but the truth is that God is love because God is a Trinity.”

Right out of the gate, that’s an incredibly controversial statement in a time when the prevailing wisdom is that all monotheists worship the same loving God. But ancient Scriptures contain a wisdom that sounds foolish today. Of course, Reeves didn’t dream this stuff up. People would never have created the Trinity if the Bible didn’t reveal this totally unexpected kind of God. Over time, we struggled with the texts and the church’s creeds popped out.

One of the earliest summaries of the Christian faith, the Athanasian Creed, says those who don’t believe in the Trinity will “perish everlastingly.” In other words, no Trinity, no grace. We can’t believe in a God whose fundamental identity is love if we don’t say with this fifth century creed, “That we worship one God in Trinity, and Trinity in Unity; neither confounding the Persons; nor dividing the Essence.”

Now, you might be tempted to think the creeds are unnecessarily exclusive and that we highly evolved monotheists of the 21st Century can have a single-person god who loves us without all the complexity of the Trinity. But think about it, a being whose eternal essence is love requires an eternal Someone to love. Love without a Beloved is no love at all.

Back to you, Dr. Reeves:

“Therein lies the problem: how can a solitary God be eternally and essentially loving when love involves loving another? … Single-person gods, having spent eternity alone, are inevitably self-centered beings, and so it becomes hard to see why they would ever cause anything else to exist. Wouldn’t the existence of a universe be an irritating distraction for the god whose greatest pleasure is looking in a mirror?”

A single-person god wouldn’t even create, much less love his rebellious creation. But one God in a Trinity of persons who have been united in love for all eternity creates from an overflow of shared delight and even extends intra-Trinitarian love to a creation that has become unlovely.

Have I lost you yet? Does this growing pile of words have you itching for an illustration at this point?

To approach comprehending the mystery of the Trinity (and that’s probably the best we can do), we have to start by looking at the God Jesus revealed. Jesus called him Father. If he had just called him Creator or Ruler, we would have ended up with a God who depends on us to be who he is.

“…if God’s very identity is to be The Creator, The Ruler, then he needs a creation to rule in order to be who he is. For all his cosmic power, then, this God turns out to be pitifully weak: he needs us.”

But Jesus called God Father, and he said we could too. In John 17:24, he says, “Father, I desire that they also, whom you have given me, may be with me where I am, to see my glory that you have given me because you loved me before the foundation of the world.” God’s not a Father who needed to create children in order to be who he is. He’s God the Father who, for all eternity, loves God the Son in the unity of God the Spirit. That’s “before the foundation of the world,” and it’s quite natural for a God like that to gush with love, giving life and grace to his creation.

Following Reeves’ train of thought, it’s relatively easy to see that Jesus revealed a Father God who has always loved his co-eternal Son (a Son who claimed to be God himself). We look at the Scriptures and see God the Father and God the Son, but what about God the Holy Spirit? Why is the third person of the Trinity so important?

“…the way the Father makes known his love is precisely through giving his Spirit. In Romans 5:5, for instance, Paul writes of how God pours his love into our hearts by the Holy Spirit … It is all deeply personal: the Spirit stirs up the delight of the Father in the Son and the delight of the Son in the Father, inflaming their love and so binding them together in ‘the fellowship of the Holy Spirit’ (2 Cor 13:14).”

By his Spirit, this Triune God delights to invite us into the eternal joy of the Godhead, into Love himself. Grace is the door to the Trinity, and it’s always open. We can be filled with God the Spirit, in union with the body of God the Son, gazing into the loving eyes of God our Father.

I personally find this all very exciting, but do you know what the problem is with everything I wrote here? It’s that non-Christians don’t care. I mean, can you imagine me spouting all this stuff to pagans over beers? Blank stares around. Hell, I can’t imagine many Christians reading this far. And I don’t blame any of them. It’s such a noodle twister and all so seemingly irrelevant, or worse, insane.

And while Dr. Reeves’ little book is extremely accessible, entertaining, and packed with Trinitarian profundity, most people won’t even read that. Theology books are not flying off the shelves.

But everyone loves a good story. So… maybe it’s time for that illustration.

That’s why I wrote The Seed: A True Myth. Yes, it’s foolish to attempt to illustrate the Trinity, but I’ve never denied that I’m a fool. I’m wearing roller skates caked with buffalo poop. I had to at least try to capture people’s imaginations. If we Christians don’t do a better job at that, we’ll have no chance of capturing their hearts with the love of the one true God who is Father, Son, and Spirit. Blog posts like this just don’t cut it.

Get 20% off Amazon’s price and FREE shipping when you order Hidden Agendas and The Seed together from Key Life. Plus, all the proceeds go to support the ministry! Just click the image below. 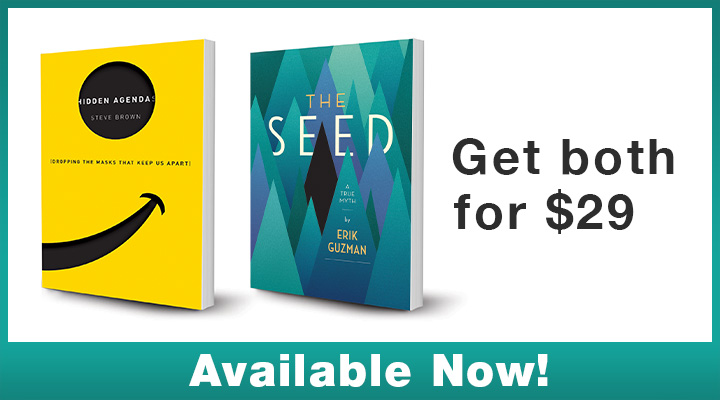